Wasn’t kept quiet for long as he lost Wijnaldum between the lines to set up Jesus for 1-1 – a fourth assist in six games. Showed he is human by missing the target from 12 yards, dragging his spot-kick wide. Only the second penalty he’s missed, but faded somewhat after half-time, perhaps affected by a whack on his ankle moments into the second period.Rodri – 6Liverpool experienced far too much joy getting through City’s midfield during the opening half, despite the Spaniard covering over 6km in the first period – more ground than any of his team-mates. Looked much more assured after half-time in a mixed bag.Ilkay Gundogan – 6Given plenty of space with just Wijnaldum and Henderson in central midfield – but did very little with it. Better after the break, as City improved in general, but still could not help find a way through.Ferran Torres – 5Was on the fringes despite the pulsating first half, with just 19 touches before he was hooked 15 minutes after the break.Gabriel Jesus – 7 Played in a deeper central role than usual but was on the fringes in the first half and didn’t torment City out of possession as he is famed to do, regaining possession just twice. Shot badly off target after the break and was hooked before the hour mark. Looks far off his best level.Sadio Mane – 7So lively early on and too quick for Kyle Walker just 11 minutes in to win a penalty. Continued to torment City’s right-back. Liverpool’s standout attacker, winning free-kick off Dias in central area just before break.SUBS Xherdan Shaqiri – 6Came on for Firmino with half an hour to play and the game tied, and looked after the ball but never found himself in the position to craft an opening, as he had last weekend against West Ham.James Milner – 7 Came on for Alexander-Arnold just after the hour and demonstrated a reminder of his versatility by slotting in seamlessly at right-back. Made more tackles than any of his team-mates managed in the whole match, and won a couple of key one-on-one battles.What’s next?Manchester City go to Tottenham after the international break on Saturday November 21, live on Sky Sports Premier League at 5.30pm, and then go to Olympiakos in the Champions League at 5.55pm on Wednesday, November 25.Liverpool host Leicester on Saturday November 21 at 3pm, before hosting Atalanta in the Champions League at 8pm on Wednesday, November 25. Gabriel Jesus scored a fine equaliser for Manchester City, after Mohamed Salah had given Liverpool the lead from the penalty spot in an engrossing 1-1 draw at the Etihad. But how did each player perform? Read on for our player ratings… Man CityEderson – 6Reacted smartly to make crucial intervention inside a minute to take Firmino wide of goal. Stood big to deny Alexander-Arnold on the stroke of half-time, and was alert to react to the loose ball. Lucky not to be punished for a weak punch after the break.Kyle Walker – 5 Could have no complaints having got the wrong side of Mane to concede first-half penalty. Not the first time this season he has conceded a spot-kick having done so against Leicester, and Denmark while on international duty. Labelled an “idiot” by Roy Keane – somewhat hyperbolically – but needed to be better in the big moments. Booked in final seconds for tough challenge on Wijnaldum.Ruben Dias – 7City’s conductor from the back, completing 42 of his 45 passes in the first half. Showed his range by finding the flanks to frequently beat Liverpool’s high press. With three tackles and more successful passes than any of his team-mates, suggested his adaption to the English game may be well on its way.Aymeric Laporte – 7Appeared to be instructing defence to drop deep for much of the first half, but City improved after Jesus’ leveller, visibly playing 10 yards higher up to put the squeeze on their opponents, and he and Dias dealt well with Salah, Firmino and then Shaqiri after half-time.Joao Cancelo – 7- Advertisement – – Advertisement – 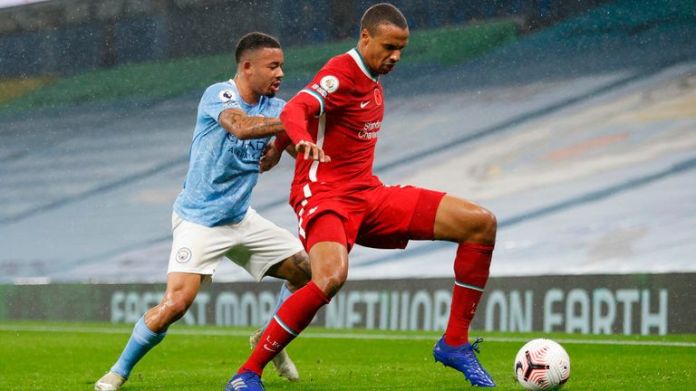 Image:Joel Matip shields the ball from Gabriel Jesus Kept busy by the in-form Jota with Salah also dropping into pockets. Guardiola’s current choice of left-back not in his ideal position but not found wanting. A strong second half where he offered options going forward and kept Diogo Jota quiet did his hopes of cementing a role in the team no harm.Kevin De Bruyne – 6 Found Sterling with a trademark cross midway through opening period but denied assist by combination of Alisson and Matip.De Bruyne was only afforded 12 touches inside the opening 30 minutes – as Liverpool did a fine job of preventing the ball from getting to him.- Advertisement – Equaliser helped City locate their mojo. Did he mean it? Mostly certainly, he’s Brazilian. Took his one half-chance well, losing Alexander-Arnold with sharp turn – Romario-esque – before poking beyond Alisson. Should have done better with a free header after the break.Raheem Sterling – 7Punished for trying to stay up in the box when pushed by Jota, moments before Mane earned Liverpool penalty for going to ground. Denied from close range by Alisson in one clear opening when his side trailed 1-0 after 25 minutes. Always a threat against his former club and never stopped running.SUBSBernardo Silva – 6Made more of an impact than the man he replaced, but couldn’t find a way past Robertson on the Liverpool left.LiverpoolAlisson – 7Smartly stopped a Raheem Sterling chance midway through the first half and gladly looked across to see De Bruyne’s penalty fly wide when he’d gone the wrong way for the penalty.Trent Alexander-Arnold – 6Whether Gabriel Jesus meant his touch for City’s equaliser or not, Alexander-Arnold wasn’t tight enough to his man. He almost made up for it just before the break but drilled a shot at Ederson and whipped free-kick off target. Forced off with a calf problem after an hour.Joel Matip – 7 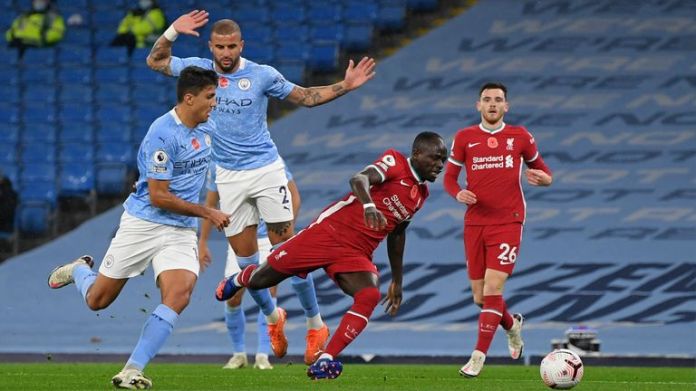 Image:Kyle Walker fouls Sadio Mane and gives away a penalty 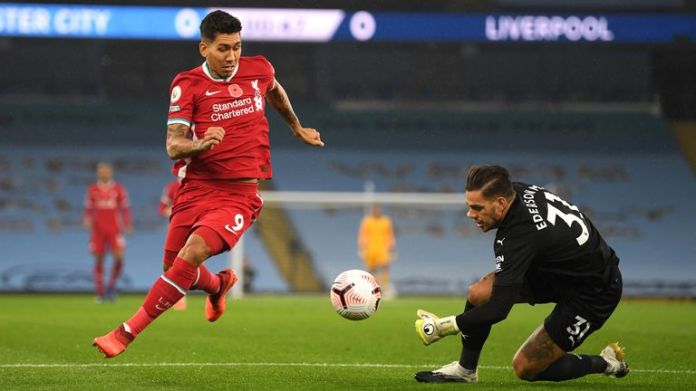 Image:Roberto Firmino attempts to dribble round Ederson Jurgen Klopp turned to Matip’s experience for this huge clash and Matip didn’t let him down. Perfectly placed to clear after Alisson kept out Sterling’s shot. Booked at the start of the second half for late tackle on De Bruyne which left City’s ace limping.Joe Gomez – 6Hard done by for City’s penalty and victim to the new handball rules – branded a “nonsense” by Gary Neville on commentary – but escaped punishment when De Bruyne missed. Also lucky Jesus headed wide after the break when striker ran off him.Andy Robertson – 6Found himself in space to cross a couple of times in the first half but couldn’t find his target, however, he decisively forced the pass into Mane to win the penalty for Liverpool’s opener.Jordan Henderson – 6Quickly onto De Bruyne in the early stages but dragged a shot from distance wide midway through the first half. Had to work hard in a midfield two with Wijnaldum to cover City’s midfield and racked up the most distance covered of any Liverpool player.Gini Wijnaldum – 5Like Henderson, was charged with closing down De Bruyne whenever he was in his vicinity. However, Wijnaldum was caught in possession by the Belgian in the build-up to a Sterling chance, and then dragged out of position as City equalised, leaving De Bruyne in space to feed Jesus. A knock to City’s star man at the start of the second half reduced his threat and made Wijnaldum’s task easier.Diogo Jota – 5Given a start on the back of his sensational recent form but a scuffed shot was his only major contribution in the first half. Another mis-hit effort came early in the second period. Will be frustrated not to have made of his opportunity on the big stage.Mohamed Salah – 7Played up top and then stepped up to emphatically dispatch his spot-kick to give Liverpool the lead. That advanced role left him short on involvement – no Liverpool outfield starter had fewer touches.Roberto Firmino – 5 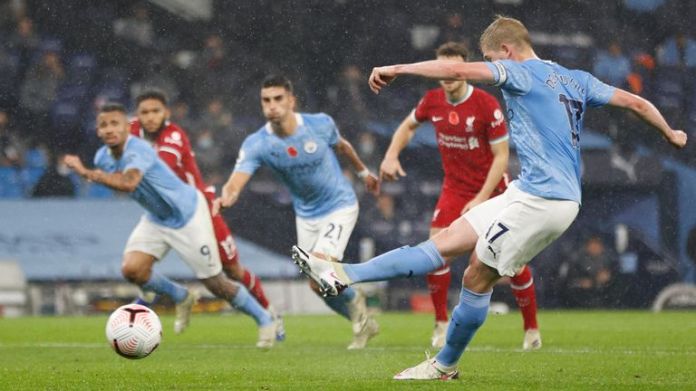 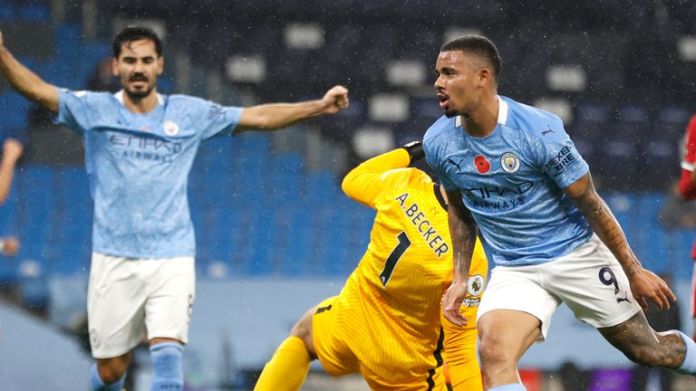 Image:Gabriel Jesus wheels away after equalising for City – Advertisement –